Today's challenge was a favorite toy. Kate chose to focus on the trampoline and gained cooperation from Makenna for her shot. I may be handing Kate the camera to capture all the teenagers.


In other news, you know you are the mother of teenagers when....

Motherhood. It's quite a ride. 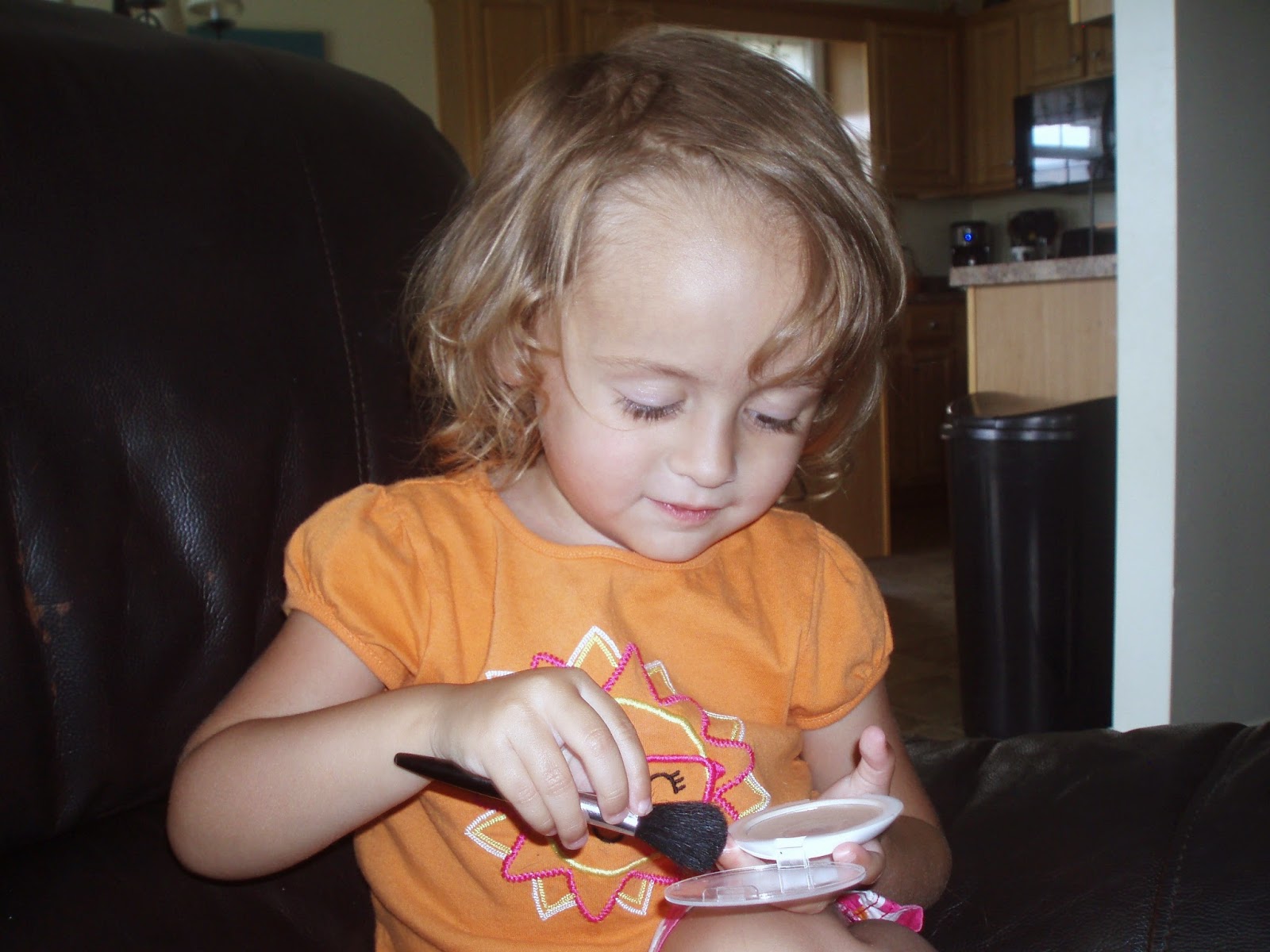 We're heading out to celebrate Miss Devyn's third birthday. Yesterday she played with Makenna's makeup and was quite interested in "blending in with a brush" followed closely by applying lip balm to her forehead. She's adorable.

Today's prompt was "favorite thing to do" and both Kate and Ty agreed they needed to go to the park for these photos. Kate loves the merry-go-round and Ty loves the trains.
In other news, Lauren has successfully completed her junior year. She's had a rough year overall but has shown amazing growth and perseverance. She is celebrating with friends tonight and looking forward summer.
I have begged this child for photos. I take what I can get.
Posted by Baughman Family at Friday, May 30, 2014 No comments:

Today's prompt was the word hands. Kate decided I should do a  handstand so she could take an awesome photo. I let her know I have never successfully completed a handstand and don't plan to try perfecting it now. She then asked me what I could do with my hands and I rattled of a list along the lines of this: clean, cook, change diapers, wipe noses, clean ears, etc. She looked me dead in the eyes and very slowly asked, "okay, what can you do with your hands that we could photograph?" I cracked up. I apparently lead an exciting life.

I didn't expect a kid's photo challenge to leave me feeling exposed or vulnerable but today's photo caught me off guard. Kate chose to photograph my hands. I have purposely guarded my hands in photos for quite a long time.  Between the inflammation and the psoriasis outbreaks, my hands are anything but beautiful. I am still unsettled but somewhat relieved. Here they are; healing at the moment but always prepping for another outbreak.
Hands can be both functional and comforting. Miss Anna illustrates that beautifully. I suppose motherhood in general does too.
Posted by Baughman Family at Thursday, May 29, 2014 2 comments:

Kate and I have decided to work together throughout the next thirty days to capture at least a photo each day. Today's prompt was playtime.

I would show you Ty's interpretation but he captured the inside of my trash can, the toilet and my rear end. I think we'll wait until he's a bit older to try again since no one deserves to have those images flashed before their eyes.
Kate then wanted to continue the bonding time and offered me my very first pedicure. Whereas it was not as luxurious as promised, I was able to read exactly one paragraph of my book and am now sporting some very thick daisies on my toes. Having lotion rubbed into my legs; however, was pretty wonderful.
Posted by Baughman Family at Wednesday, May 28, 2014 4 comments:

Motherhood appears to be more about growing me than raising children.The days I run on too little sleep and too much caffeine are not pretty. Heck, none of the days are glamorous! Pretty is surface deep and my yoga pants, hope to have my teeth brushed before noon, didn't notice someone wiped their nose on me is anything but pretty. However, at the end of the day, when I am hiding in the closet consuming my secret stash of chocolate, I pray to be more beautiful in the manor that matters. I strive to be more patient in my tone and encouraging during struggles and tantrums. Some days I am confident. Other days I could weep as I look at the clock and realize it is only five o'clock and I have three more hours until bedtime. Those are the days I tell my family the mommy has clocked out. As if. Clocking out is never an option. There are beautiful days, recharged and renewed. The days I have the answers and grace aren't the most predominate in my world; I am too outnumbered and the needs are too great. So, God grows me while I flail through this motherhood gig. I am incredibly blessed but lose sight all to often of how amazing this journey really is. When I take time to reflect, I see beauty in the challenging days too. It just takes a little more effort to discern in those moments. After all, even superheros need hugs too. 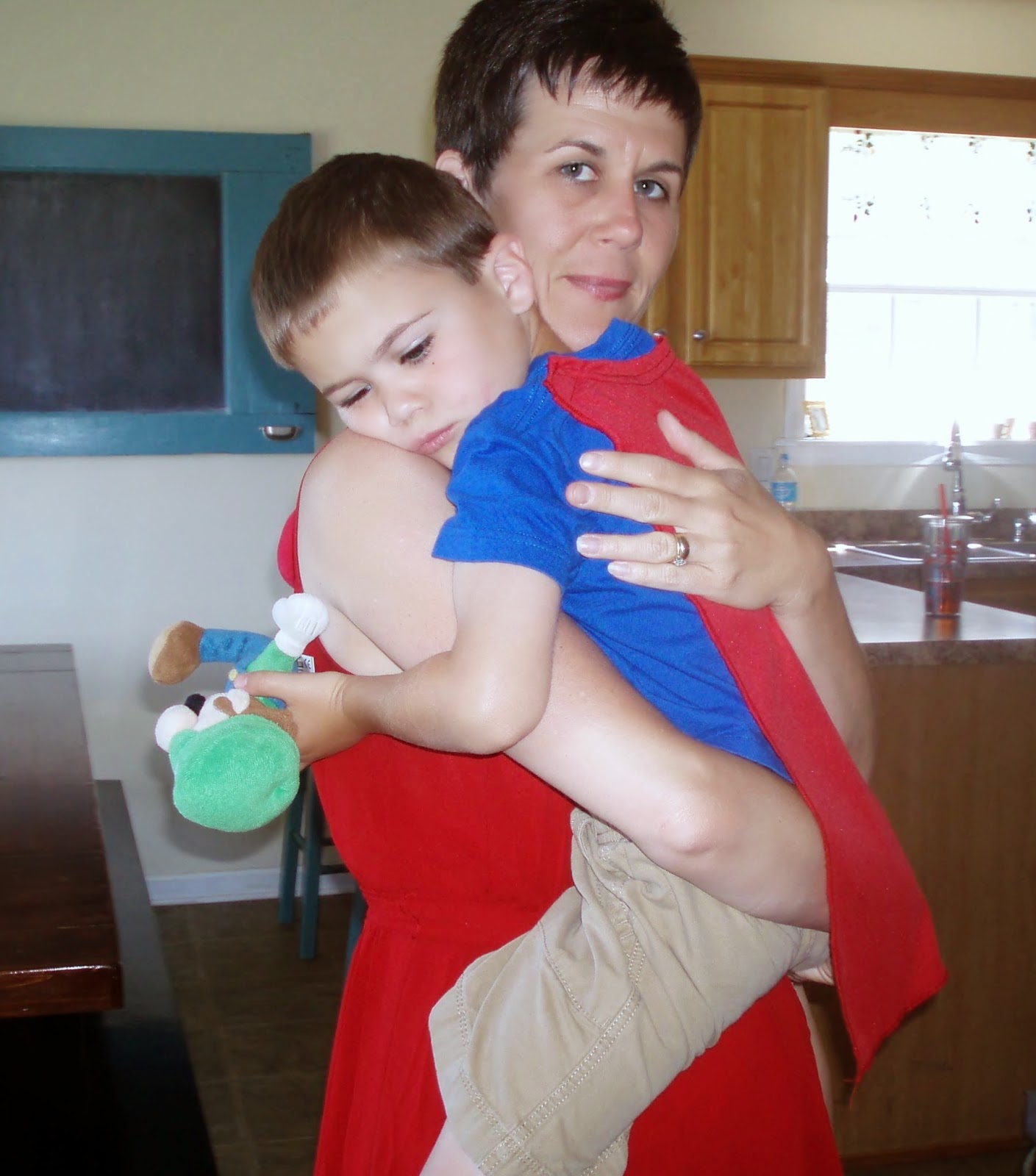 This week was full of heartache and turmoil so we started our weekend intentional about rest and relaxation. Greg and I slipped out to use his last birthday gift card for a late lunch alone. We ran a few errands and spoke in complete sentences about current challenges, future goals and better stress management. I haven't managed well this week and he was all too aware. 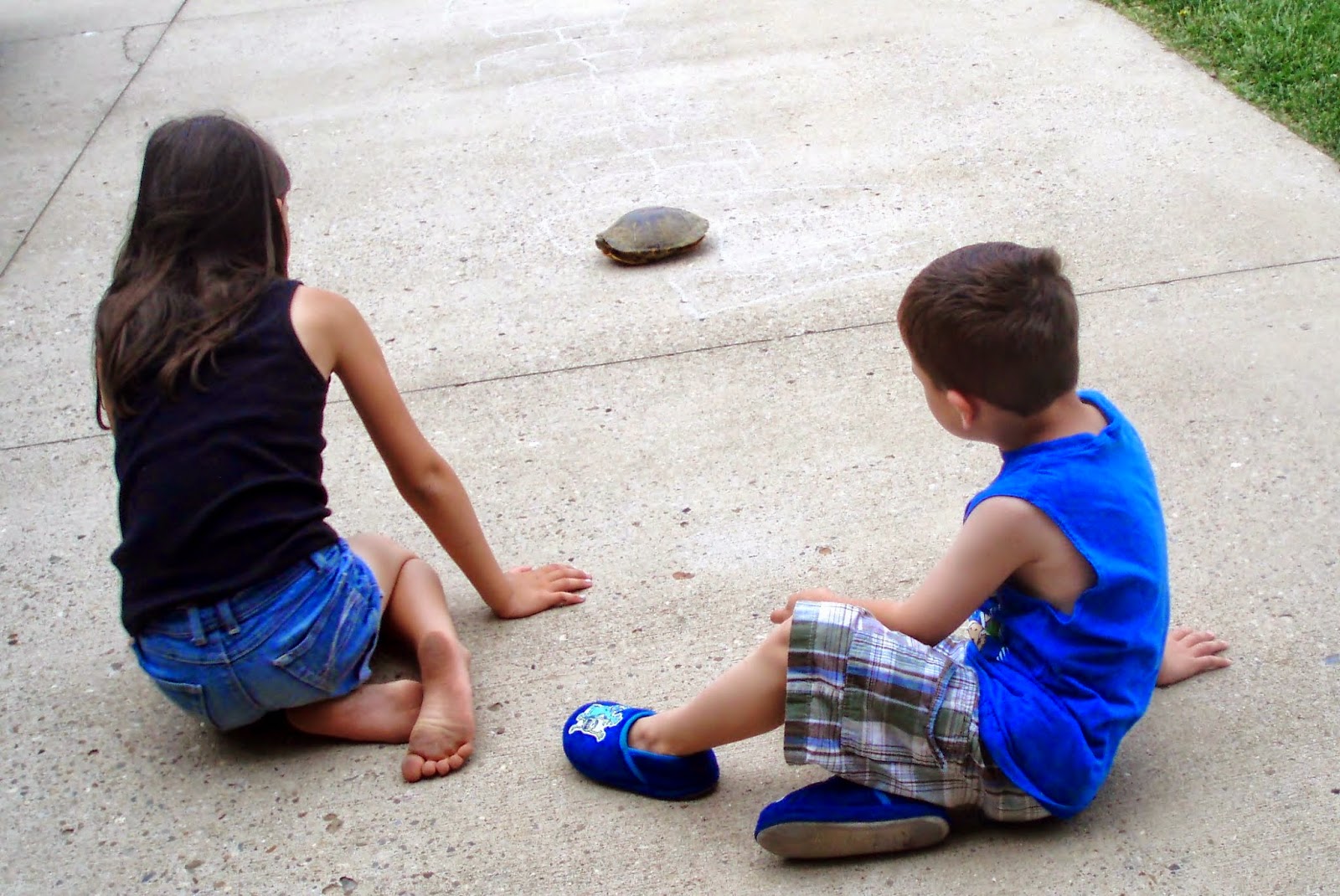 The little ones captured a turtle who happened upon our driveway this week. I allowed it to remain in captivity for a few hours, just long enough for everyone to see it. That turtle high tailed it out of sight immediately upon it's release. Smart turtle. 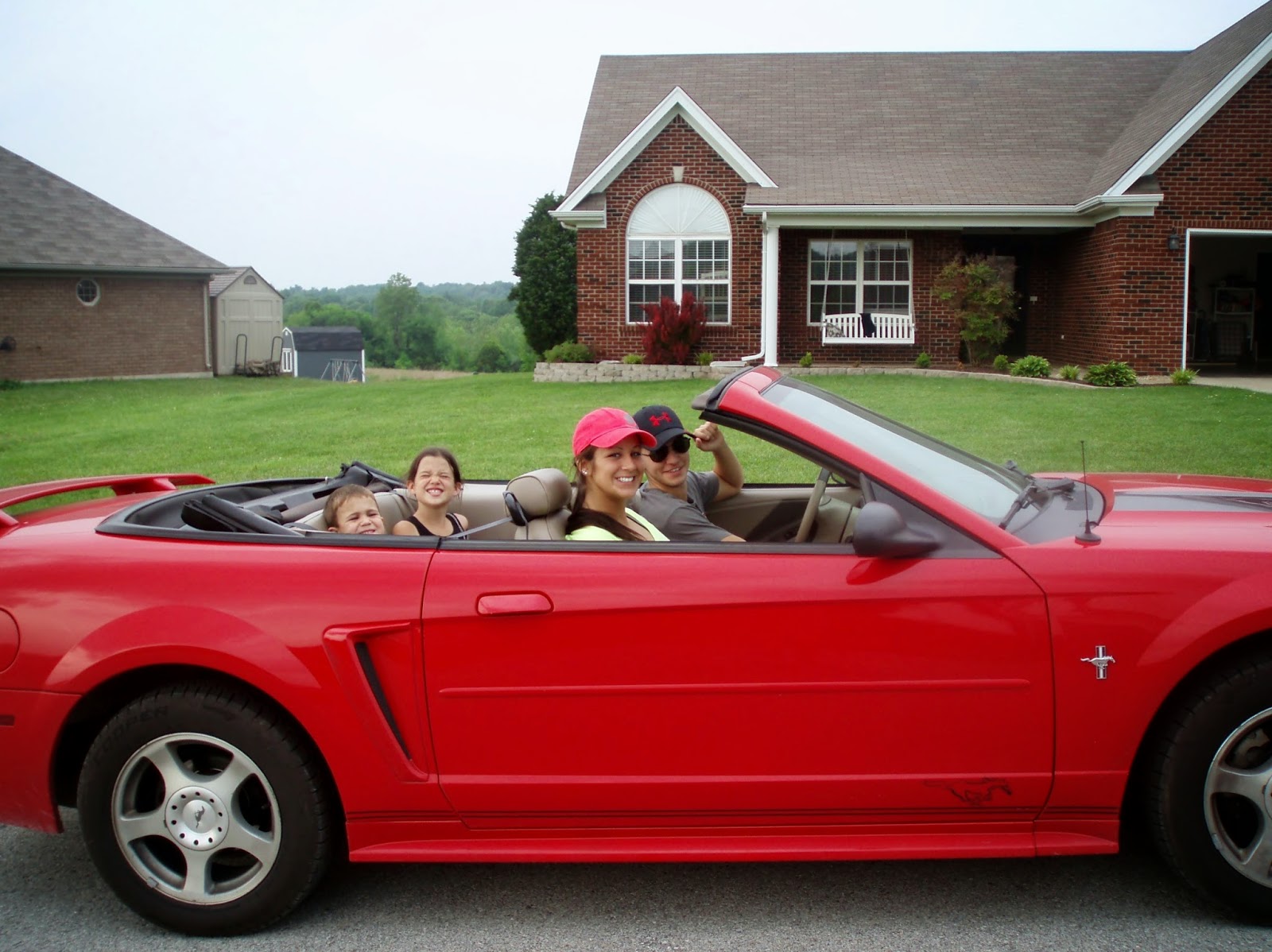 Justin had to be talked down a few times this week as he observed a few stressful encounters. He started calling me Mom and at one point was rather insistent I trade my tea for wine because there is no way anyone should deal with all of this sober. He's cute. I refused his offer and remained sober so he took the kids for an ice cream. Can you believe the kids think his car is cooler than mine?  And then he offered Lauren a trip with him and Erin to his extended family's lake house for the weekend so she could get away from a rough situation here. She has to work the entire three day weekend but he was pretty sweet to offer. We hope Erin and Justin are having a great time with Justin's aunts and uncles. They also deserved a break.

Official paperwork for Makenna's freshman year states she has declared her future career goal to "be Spiderman". I can't decide if I am more annoyed with her for not taking anything seriously or the school for putting unnecessary pressure on thirteen year old kids. Who has a clue about their future when they are entering high school? Erin had declared her goal to be a professional skydiver during her freshman year to get them off her back. I suspect we will be retiring our high school counselor in the near future.One look at another incoming Baughman should send him screaming from his office. 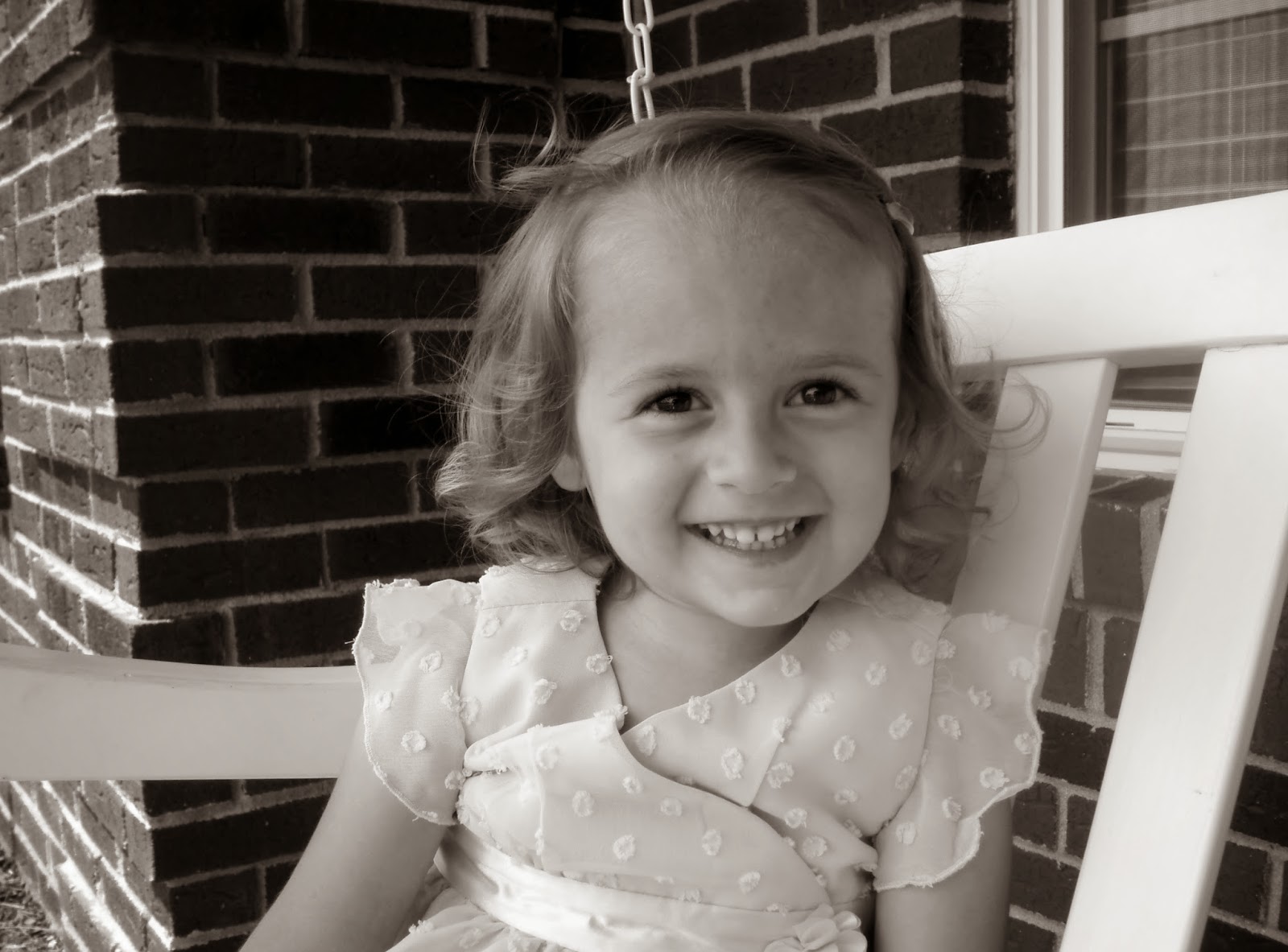 Miss Devyn celebrated turning three this week! She woke on her birthday ready to party and eat cake. Sister isn't easily redirected and ended up with a few gifts despite her party being scheduled for next weekend. She's adorable and rather persuasive too. 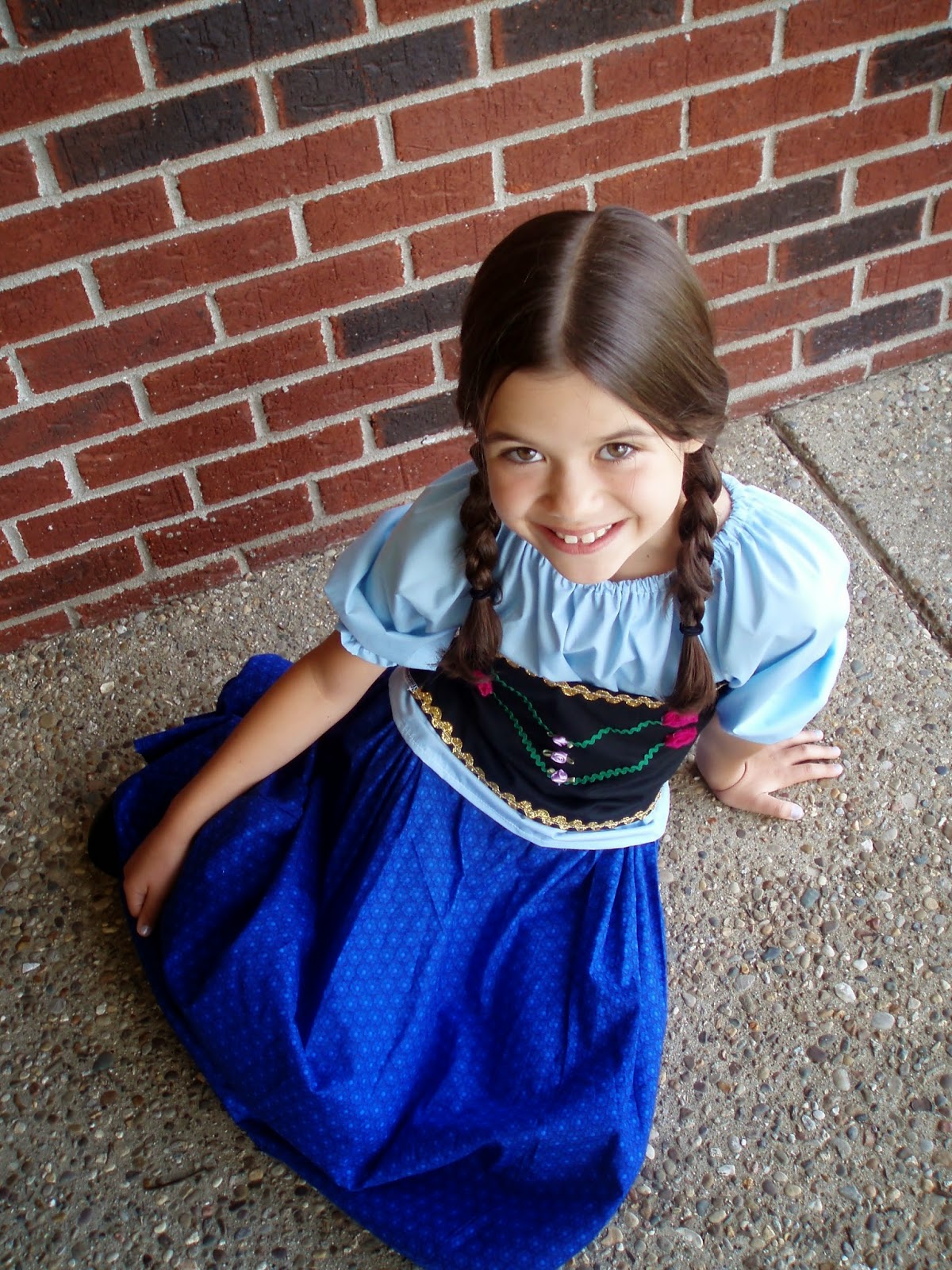 "Some people are worth melting for," Olaf from the movie Frozen. Miss Kate most certainly is one of those people. She chose the theme and we had a great time perusing Pinterest for ideas to pull it off. Frozen is in such demand, no store can keep it in stock. We had a neighbor in Orlando at Disney a few weeks ago and even he couldn't get anything! But, it came together and was a great celebration. The birthday girl is now nine years old. 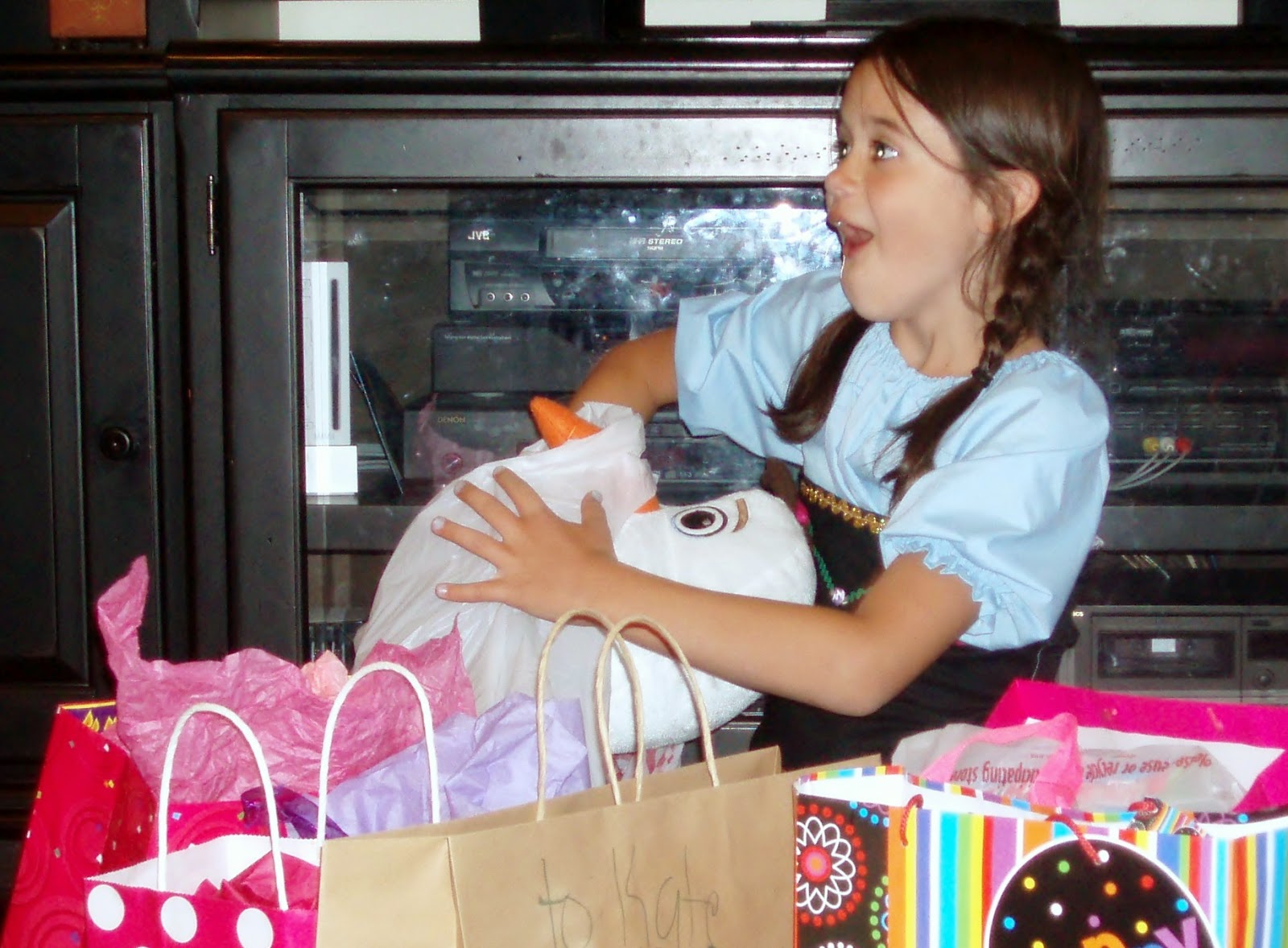 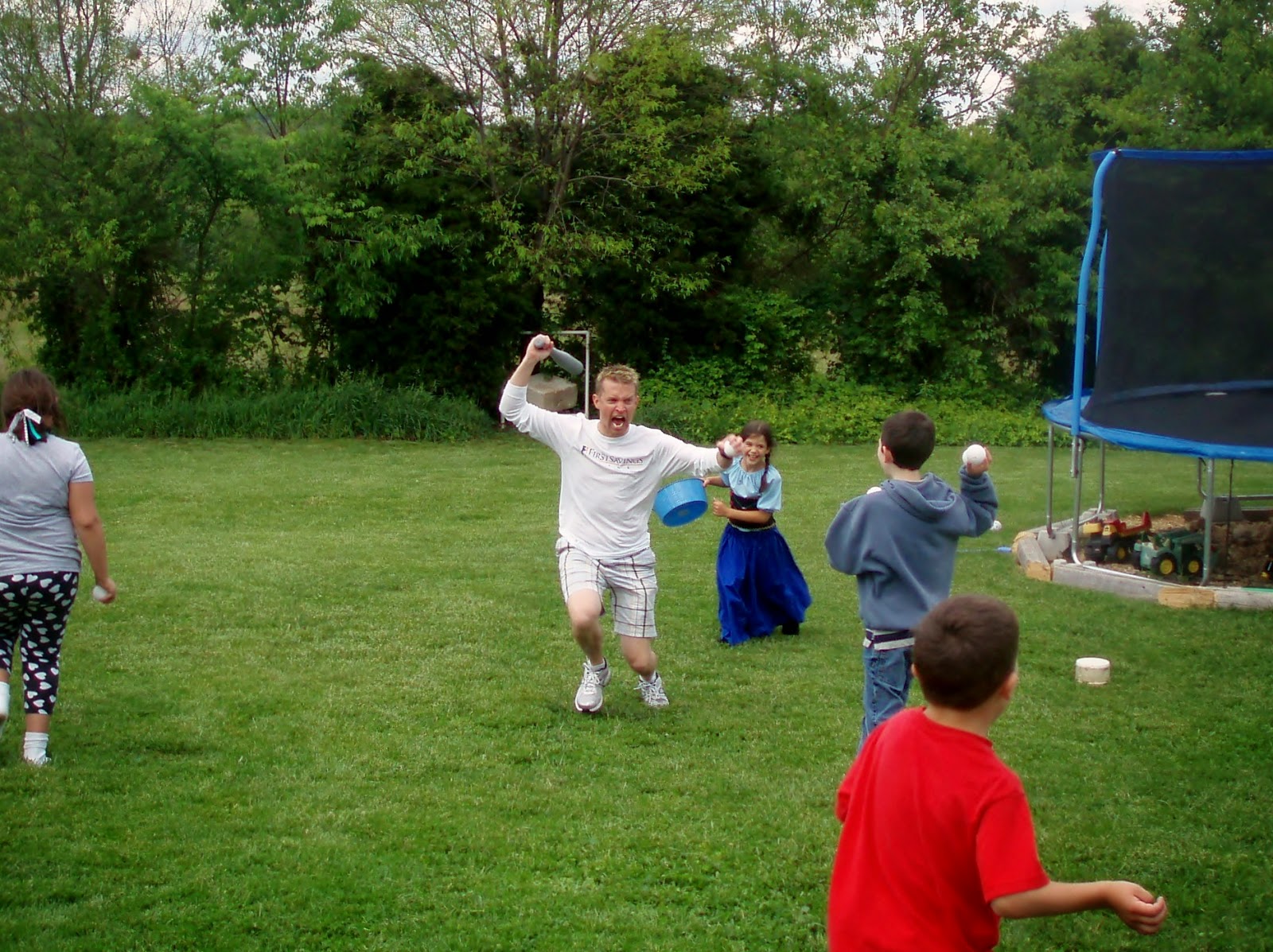 Happy birthday Kate Ryan. You truly are the Anna in our world and we love you. 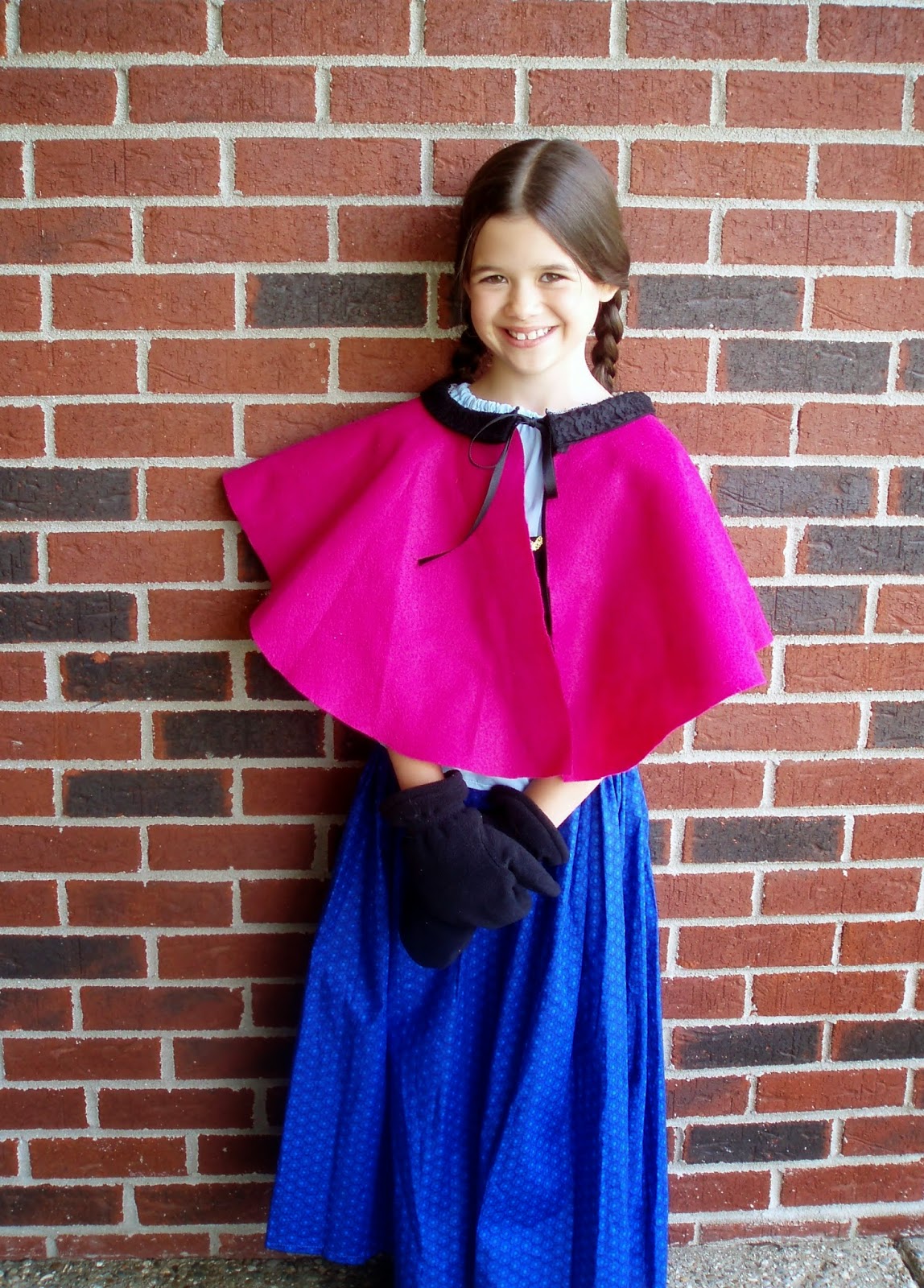 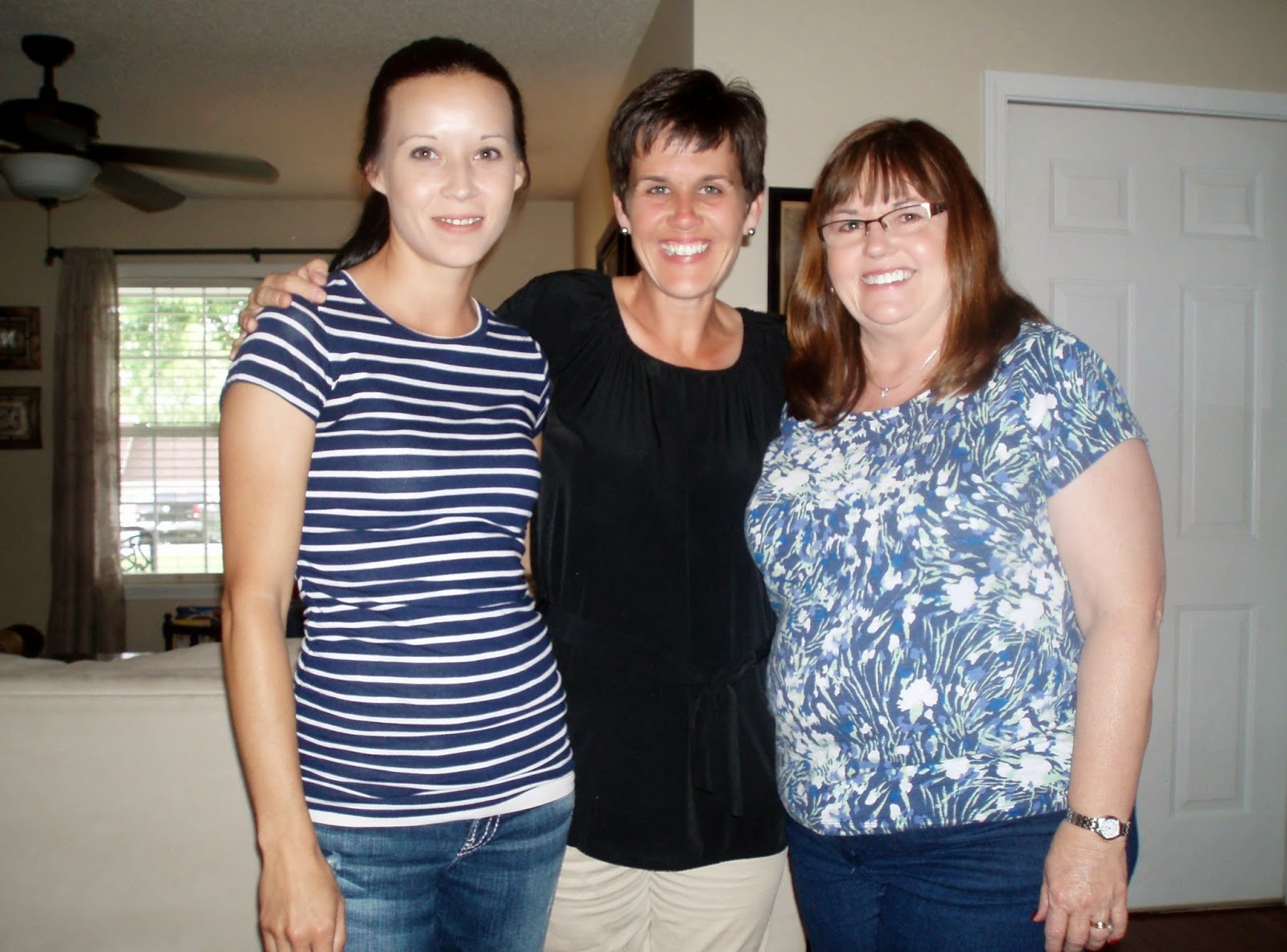 Kate, Ty and I took a quick road trip to my sister's house yesterday to celebrate Kate's upcoming birthday and Mother's Day. We also assisted my parents in their search for a new house. I am afraid we offered too many opinions and left Mom and Dad as confused as ever. 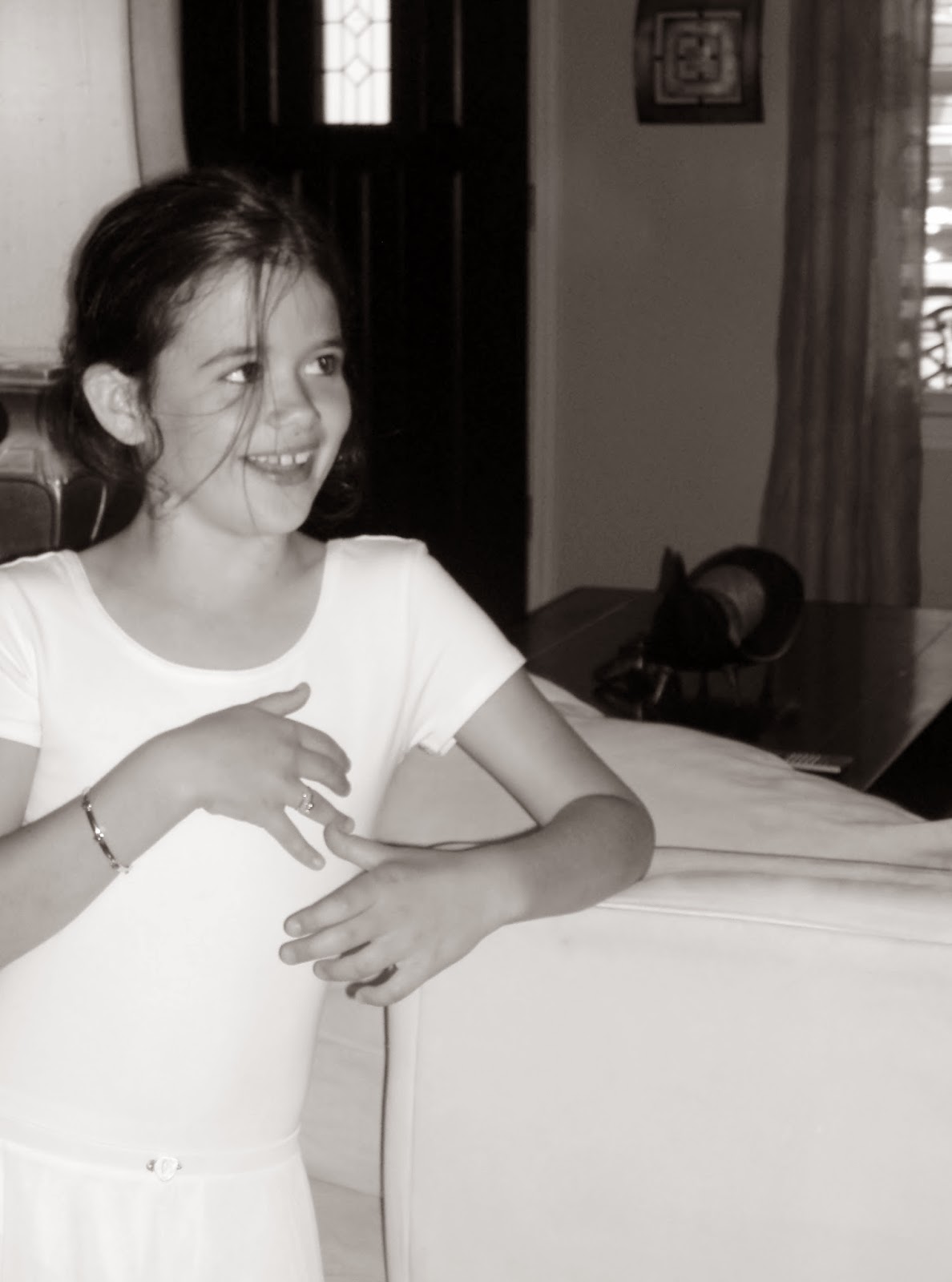 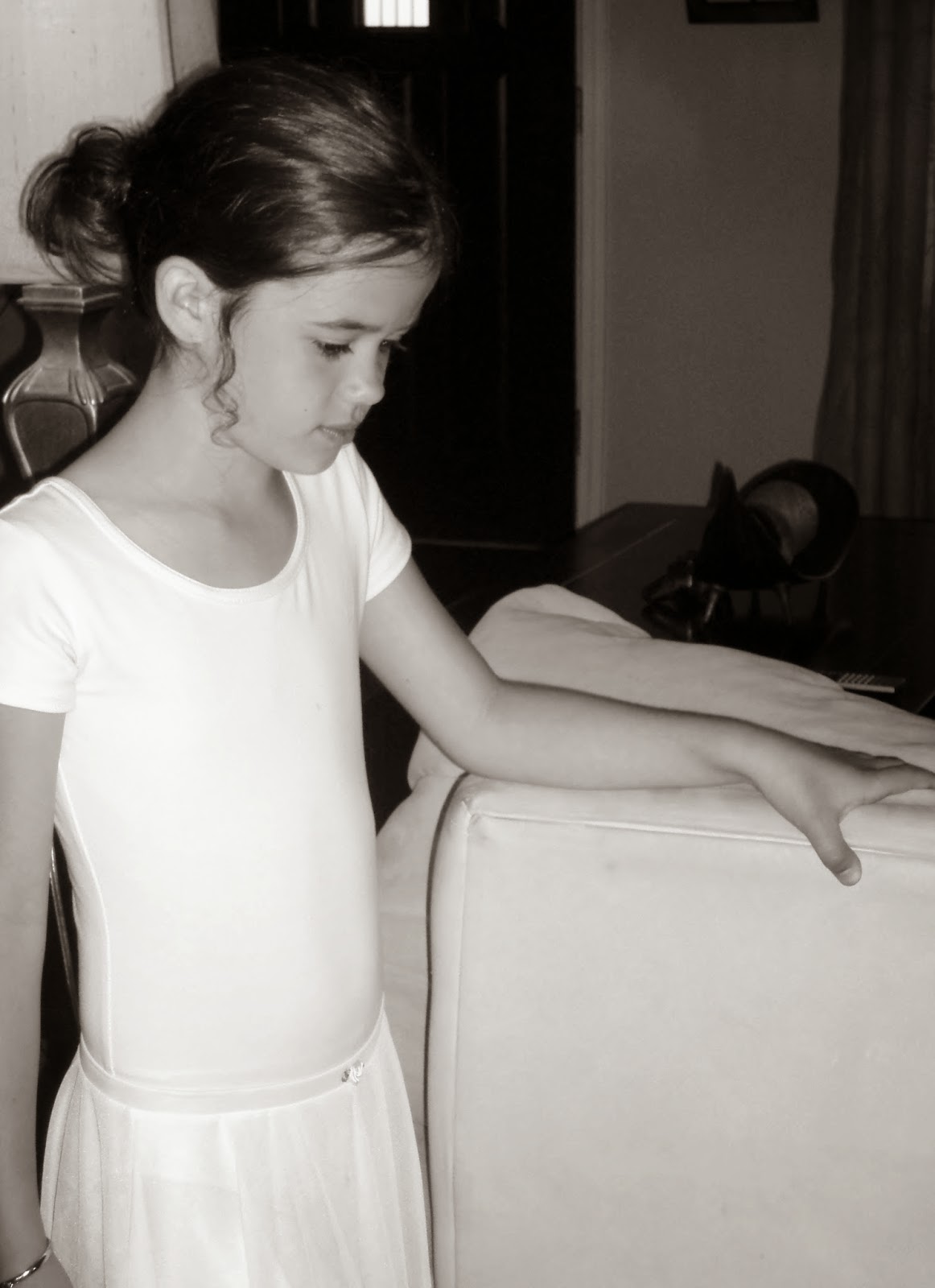 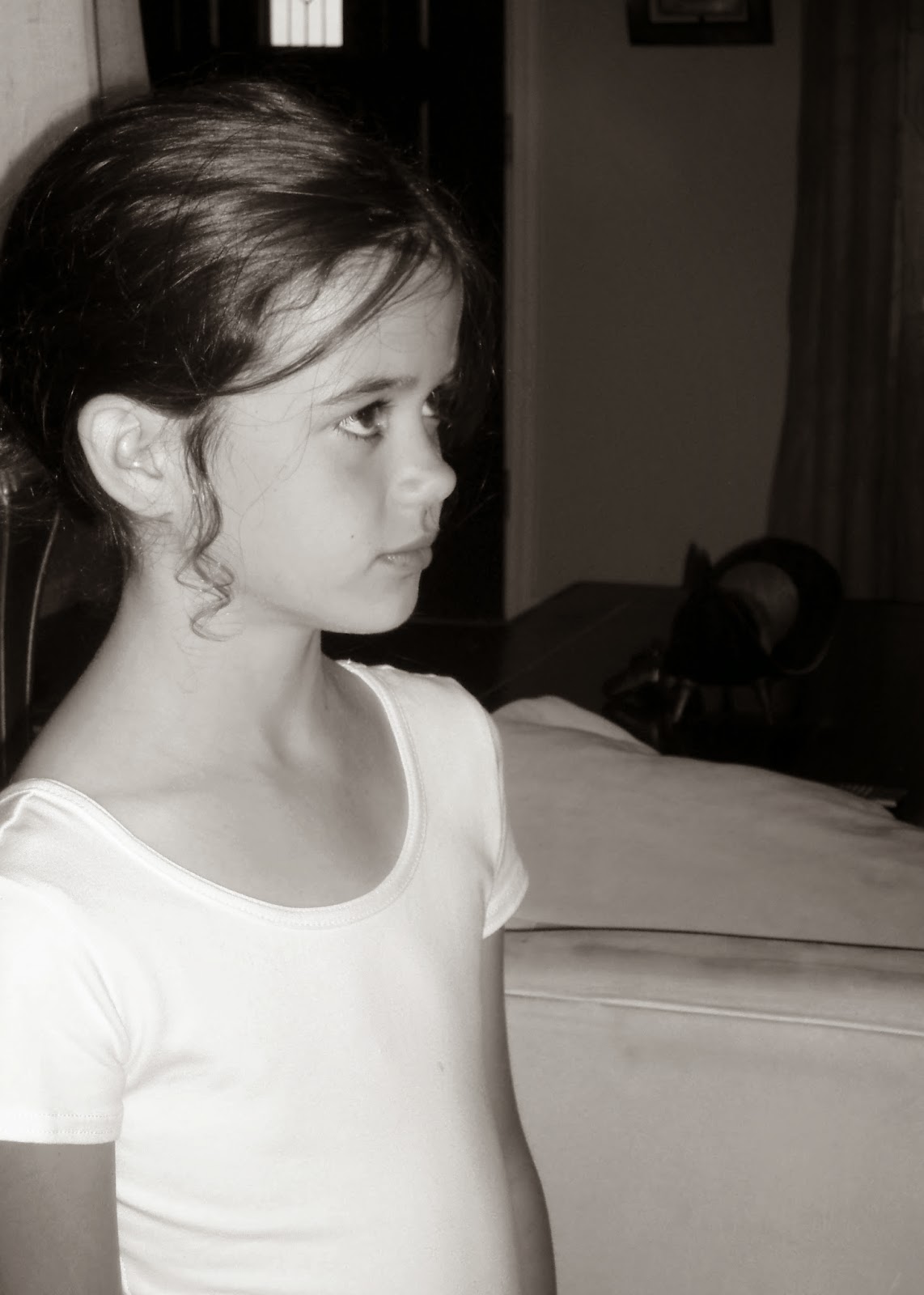 Theresa gave Kate a "ballet dress" for her birthday and then proceeded to teach her some of the lessons she remembered from her dance years. Kate will treasure the memory. I loved watching them work together. 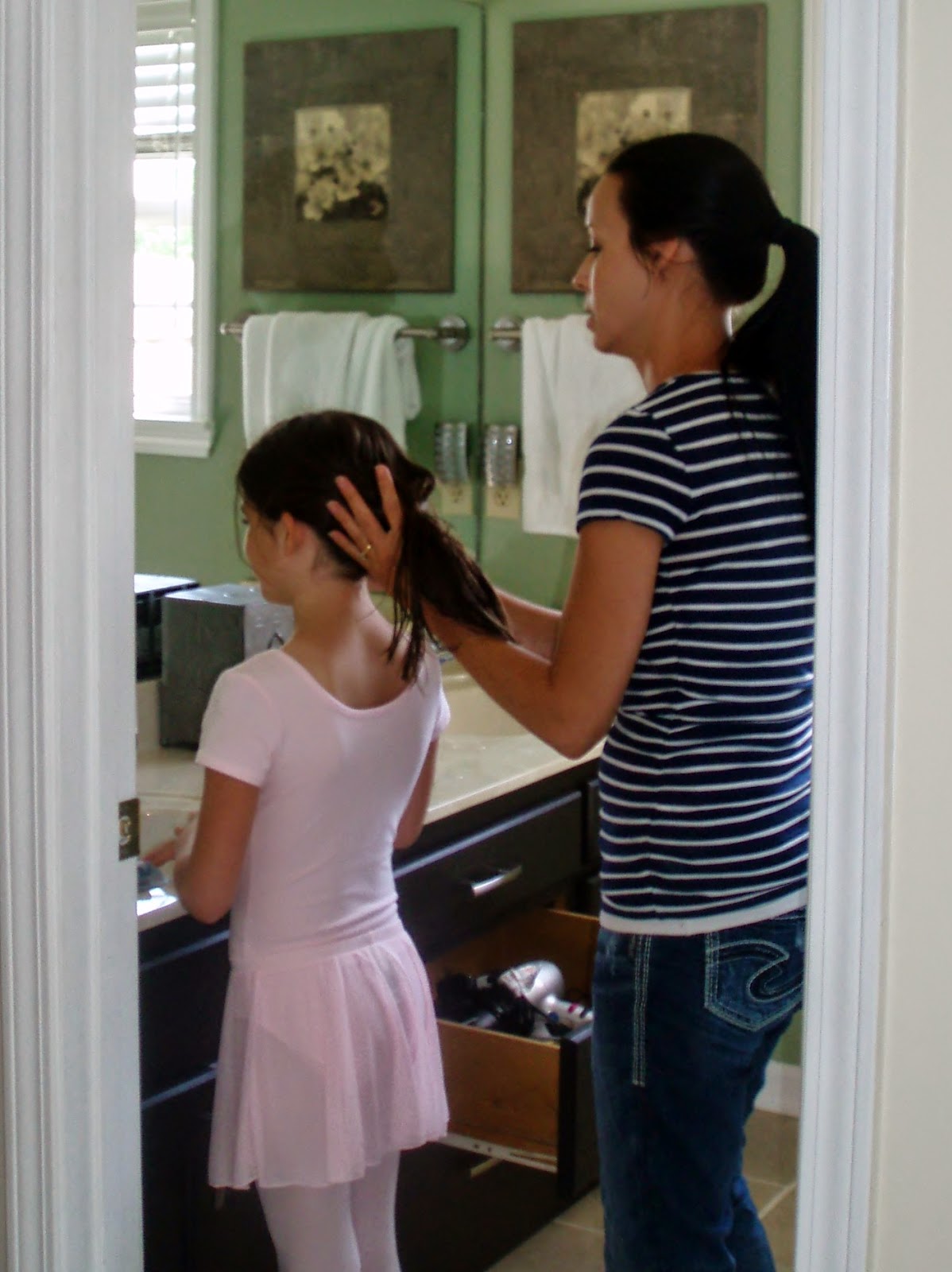 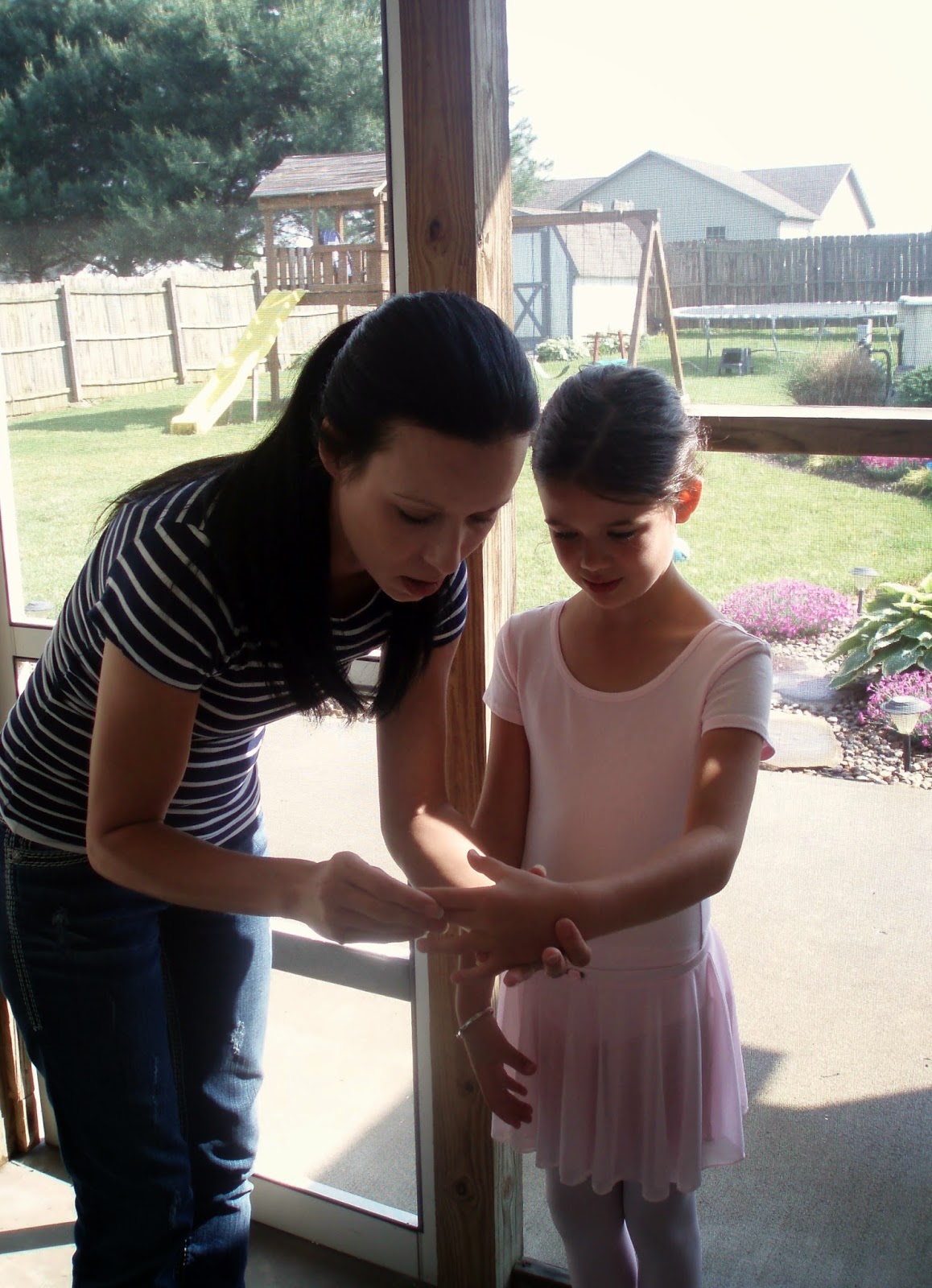 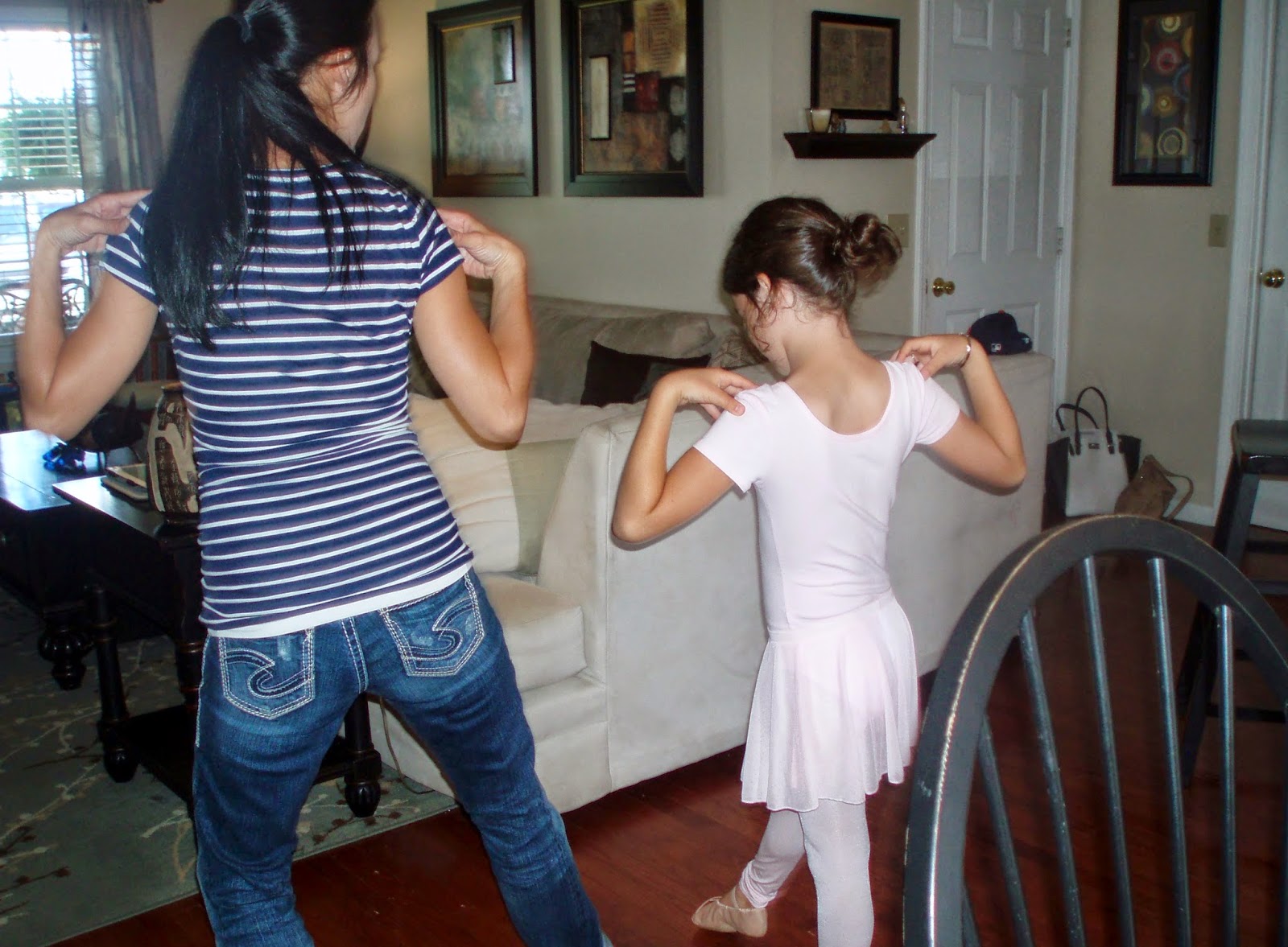 However, Uncle Jamie swears he is the best dancer in this family. He is a nut and we love him. He has a birthday this week too and maintains only the coolest people are born in May. 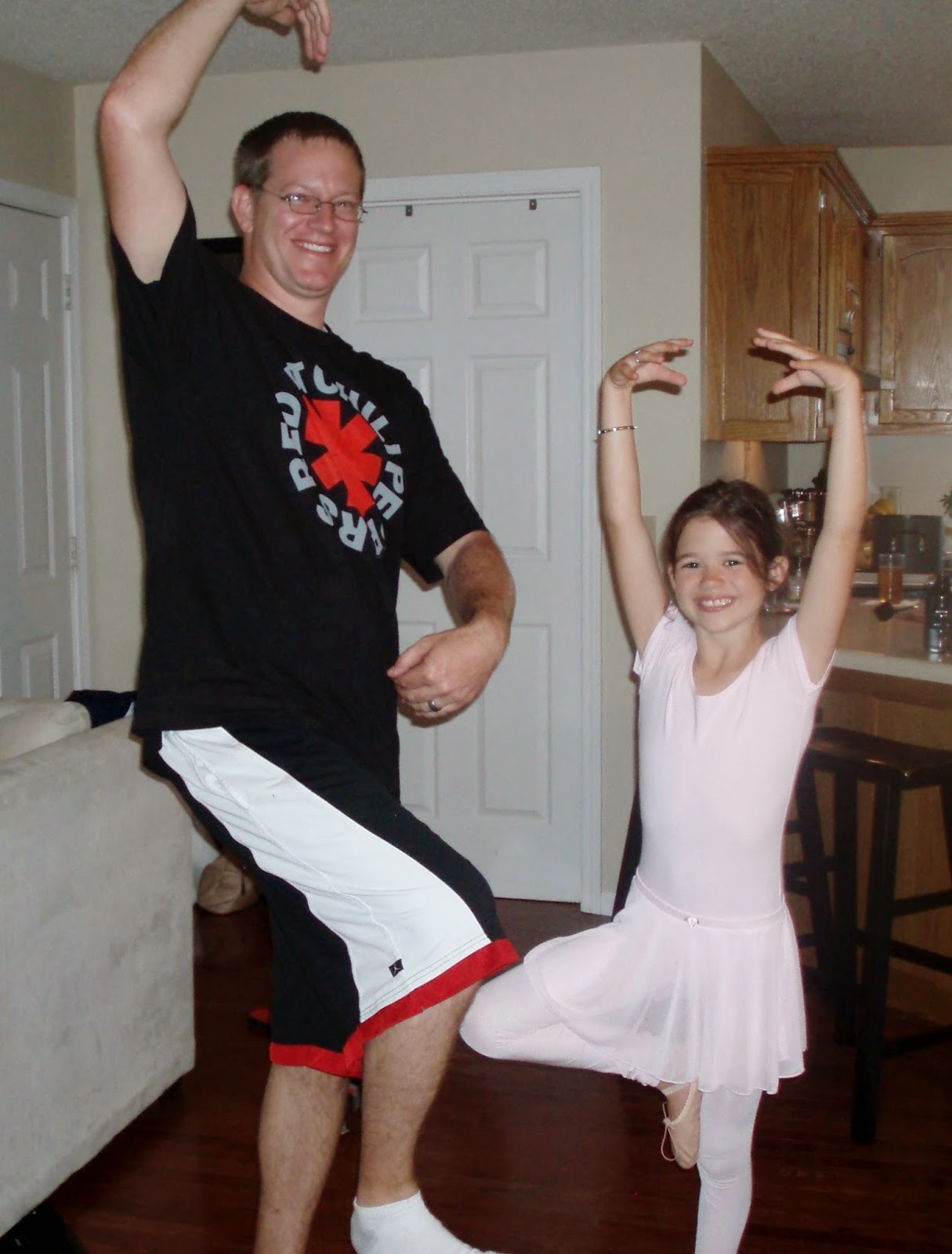 Erin enrolled in ATA College dental assisting program on Tuesday. She and I spent a few hours working through paperwork, interviews and meeting the people who will be supporting her efforts. Afterward we celebrated with dinner at Olive Garden. I love finding restaurants who will substitute pasta for veggies! Go Olive Garden!

Erin has been asked to help train a potential new manager at Subway. The first thing Erin told Richard was that she would like a Stingray Convertable and to have her schooling paid for. He was taken aback so she followed up with a comment about how she knew he was secretly on the show, "Undercover Boss". As it turns out, he isn't but he's a bit concerned about the nineteen year old who told him to make his own sandwich despite the fact he may be her new boss! Customers and managers love that girl but she automatically assumes everyone understands her sarcastic humor. Richard is being trained on far more than Subway standards, I am afraid.

We had a play date at Maverick and Gleason's house Tuesday morning. Their lovely mother insisted the kids stay for lunch while I grocery shopped ALL BY MYSELF! Scarlett may be my new best friend based exclusively on that offer alone. When I picked them up I was told they had peanut butter sandwiches because they wouldn't eat the lunch she prepared. I was embarrassed and inquired further. Ty informed her he doesn't eat Cheerios in pasta. Scarlett cracked up. My children do not recognize canned pasta.


Lauren landed a new job with JCPenney! She gained a raise and will no longer smell like fries! She's excited and nervous. We couldn't be happier for her. 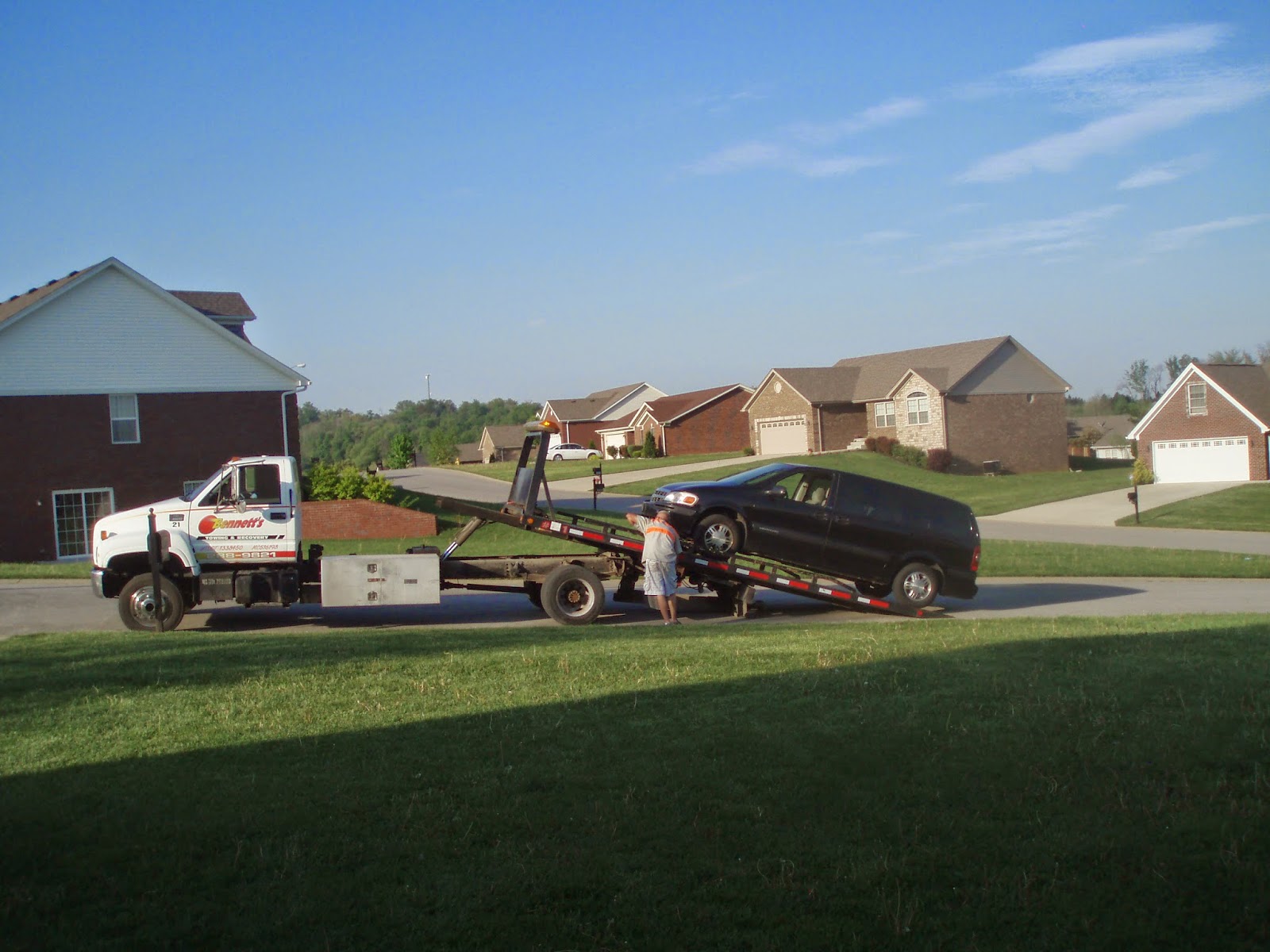 The Venture has taken her final ride. I am a bit emotional saying goodbye as a lot of life has taken place around that vehicle. She was a solid and dependable van for eleven and a half years and 204,744 miles. Now I am grounded since Lauren needs a car to get to school and work. See ya, Kia. That was short-lived. 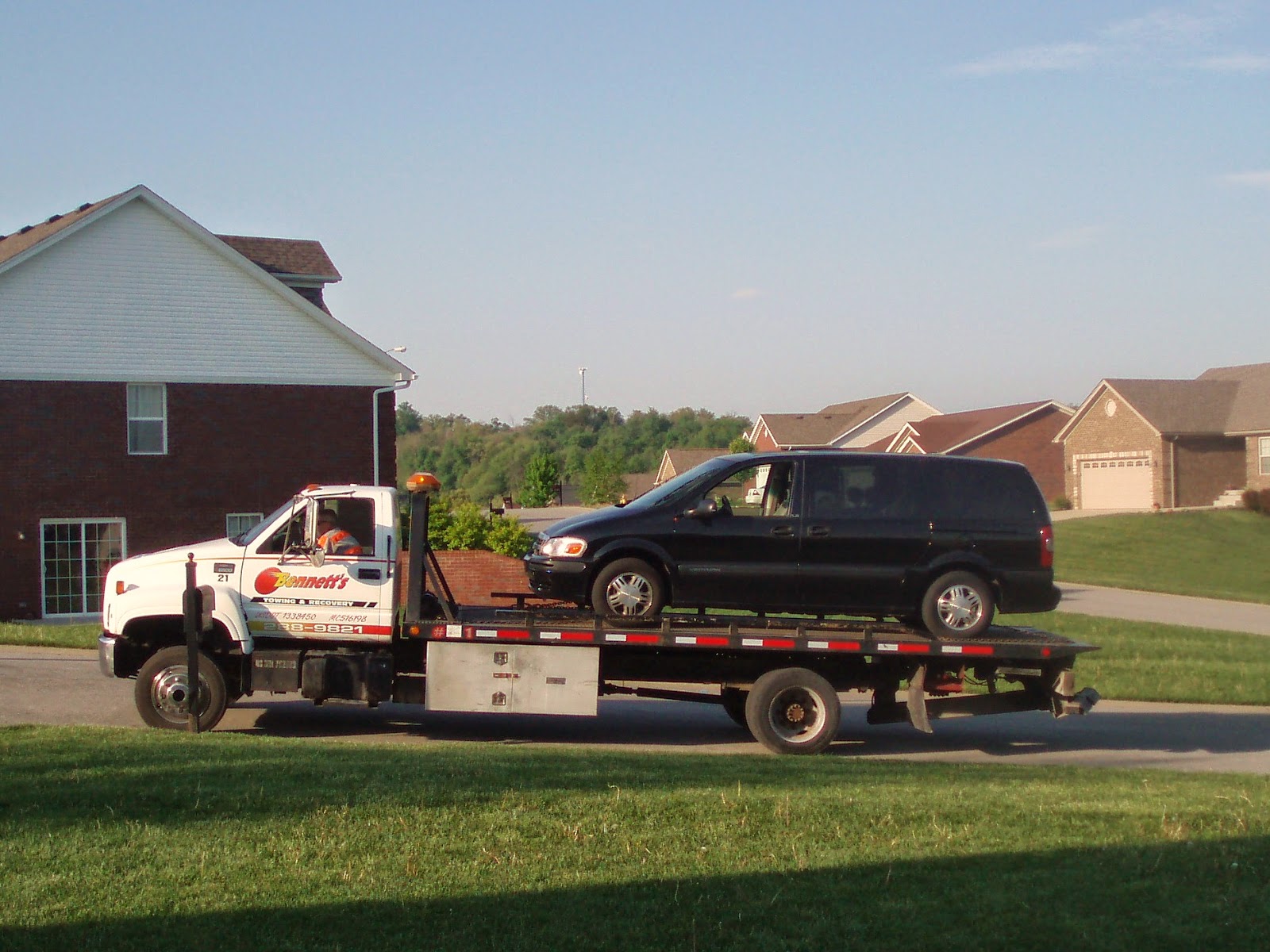