Ty woke on the wrong side of the bed one day last week. It was rough. He was mad at the world and declared he was dropping out of school. He is in first grade and generally likes it. To say it was a bad morning would be an understatement. I emailed his teacher a fair warning because I know my son well. He could legitimately be telling his friends goodbye at school because in his mind it was his last day. She laughed when she read it because she only sees the well behaved version of Ty and has a difficult time imagining his little hot head exploding all over the place first thing in the morning.

The next day he went to school without mentioning the previous day's declaration and when I picked him up, emerged from the building waving a paper and smiling from ear to ear. He had earned a shout out from his teacher for being a good friend to everyone. He has coveted the treasured shout out all year and the teacher is very selective about using them so there was a strong likelihood he may not have ever been the recipient. This was special. As I was commenting on his ability to be a good friend to everyone, he very seriously stated, "it's a good thing I didn't drop out." Honestly. 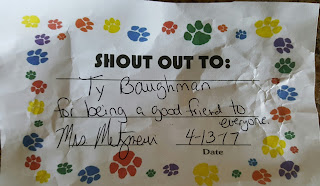 The night we were called to the hospital to say goodbye to Jen, I ended up with a tension headache that made me pretty sick. It was a long hard night of restless sleep. Once the headache lifted, I was unable to rest so I turned on the West Wing. About three in the morning, Ty wandered into my room. The episode I was watching had the White House trying to restore the first lady's image so they invited Sesame Street to air a segment with her. Ty happened to stumble into my room when Big Bird was on the screen. He looked at me in disbelief and questioned, "you watch kid shows in the dark?" I tried to convince him it was my show but Big Bird was visiting for just a minute and invited him to crawl into bed with me. He curled up next to me and asked again about Big Bird. I assured him there would be no further kid's characters so he could just go back to sleep. I kid you not, the very next scene featured Elmo! Ty is absolutely convinced I stay up all night watching kid shows without him! I considered emaling his teacher a disclaimer but decided it might be more fun to let her wonder. 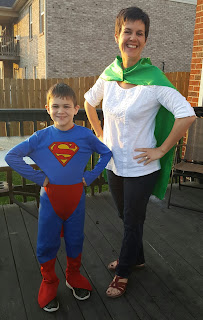 This week Ty's school hosted a Super Hero themed celebration leading up to a festival for St. Baldrick's in honor of a little girl our school lost to childhood cancer a few years ago. Ty was pumped to be a super hero at school on Friday. I asked for a photo because the costumes are not worn nearly as often as they once were and I see those days slipping away. He insisted I had to wear my cape too. Ironically, it was Jen who bought that cape for me and I was wearing it when I got the call she was gone. 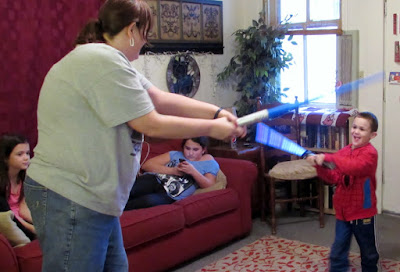 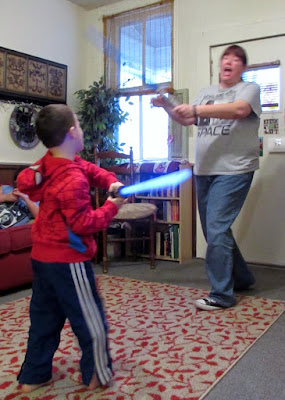 Tonight at her memorial, Ty wanted everyone to know Jen liked to have light saber duals with him. He wasn't brave enough to stand up and tell everyone but I assured him everyone who knew Jen, knew that about her. Jen loved my kids and especially appreciated stories about Ty. All of them are wrestling with this loss. Jen was one of a kind and very special to all who had the privilege of knowing her.
Posted by Baughman Family at Sunday, April 16, 2017 No comments: 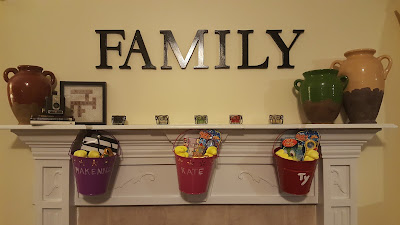 So this year the Easter bucket display was reduced to just the three remaining kids in our home. I think the bright orange and neon green buckets are needed to balance the darker tones of those left behind. But for a few days each year, it will be what it will be. 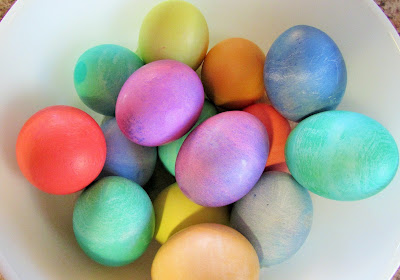 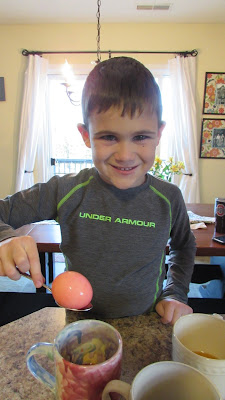 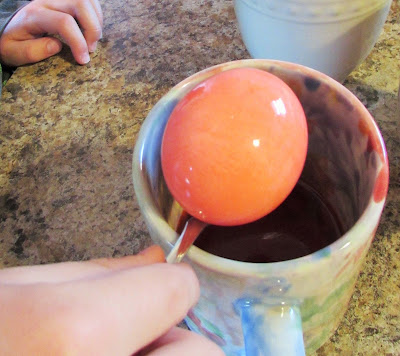 We dyed eggs, using the traditional grocery store white per the request of some picky artists despite my insistence farm fresh are pretty too. 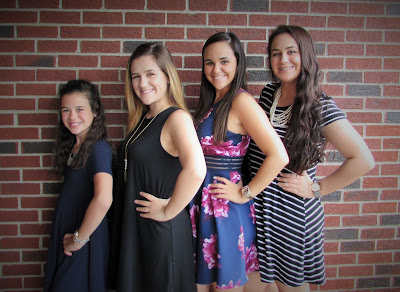 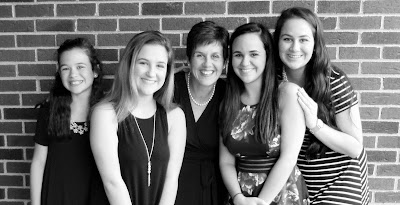 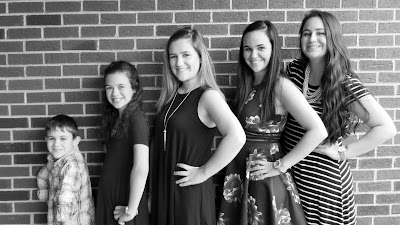 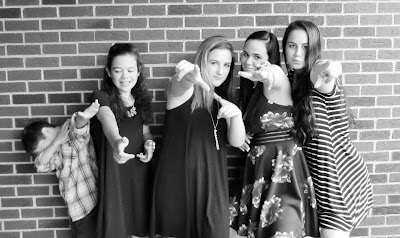 Due to Jen's memorial service this evening, we held an early dinner and polished that off with Kate's famous homemade carrot cake. 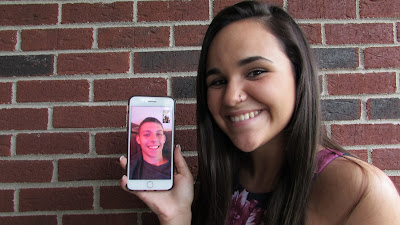 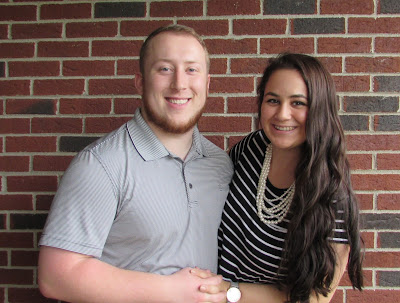 A special Facetime guest lamented he wasn't eating smoked turkey with us and another headed out to have dinner with his family when we loaded up to say goodbye to Jen. Easter was a bit somber this year.

Ten years ago I was the teacher for two year olds in the blue room on Saturday afternoons. In that room I first met Shelby who was undeniably the most advanced two year old I had ever encountered. She talked my ear off while the other babies played. Shelby introduced me to her mom, Jennifer and I was immediately drawn the woman who was raising this remarkable little girl. A few weeks after they started attending our church, Shelby was mistakenly placed in the red two year old room and Shelby made it clear that was not happening. With her little heels dug firmly in the carpet, she obstinately refused to enter that classroom, demanding to stay with me instead. I opened the door and claimed her as one of mine, to the dismay of leadership at the time. I saw Jennifer exhale deep relief and we became fast friends. Just a few weeks later, I asked her if she would be willing to help me out in the classroom sometime and from there, we started finding excuses to get our girls together so we could visit beyond the church and get to know each other better.

Jennifer was the cool mom who balanced my strict schedules and homemade dinners. Being a single working mom helped her gain the proper perspective she needed to enjoy motherhood. I learned a lot about relaxing and having fun with my kids from watching her, even though she threatened me with CPS for not exposing my children to Chuck E. Cheese or McDonald's. Those play dates with Jennifer and Shelby are still some of Kate's sweetest childhood memories; however, I may have fibbed a bit about Jen being the only one with the secret code to get into those places. I am simply not as much fun as Jen. I likely never will be because her heart was so much bigger than mine.

Seven years ago we were blessed with the addition of a star wars loving little boy who stole Jen's heart. She challenged Ty to light saber duels, located ornaments for his tree and shared stories about characters with him. He thinks she was my coolest friend. He is right. She was one of a kind.

As Jen battled for her health these last couple of years, her strength and perseverance have stood out to me repeatedly. There have been seasons I have felt defeated or scared for her as she quietly endured whatever ailment threatened her at the moment. But she remained strong and determined, never wavering in her desire to overcome.

Despite her will to remain with us and to finish raising the beautiful Shelby, her challenges were too great. My heart is broken. The world simply was a better place with Jen in it.

Rest easy my beautiful friend. I love you.

Hiking With A Hero 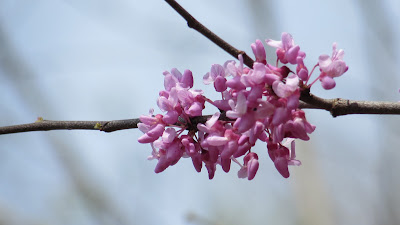 Ty and I explored a local state park this afternoon for a few hours. I was on the lookout for signs of spring while he was tracking bad guys. I have never been quite so protected.
We hiked for two hours and some of the trail was pretty intense. My little hero was tired enough to sit and rest for a few moments, which is a very rare moment in our world. 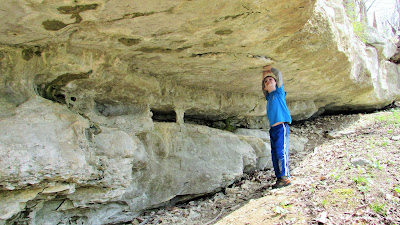 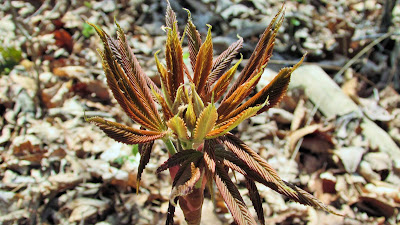 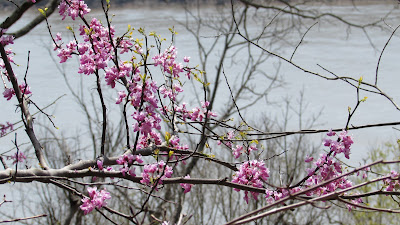 Ty has been asking for the opportunity to ride his bike across railroad tracks for a few years. Obviously the risks involved in honoring his request have prevented me from allowing it. I recalled an old abandoned railroad track that was on our way home from the state park today and finally consented. He was delighted.
He says we need to go back with his scooter next. His mind never ceases to amaze me. Today's date was fun. I can't wait to do it again.
Posted by Baughman Family at Sunday, April 02, 2017 No comments: