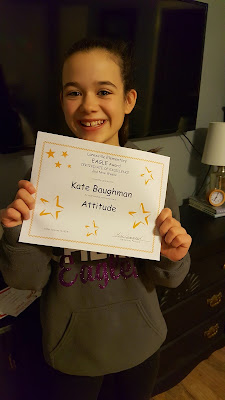 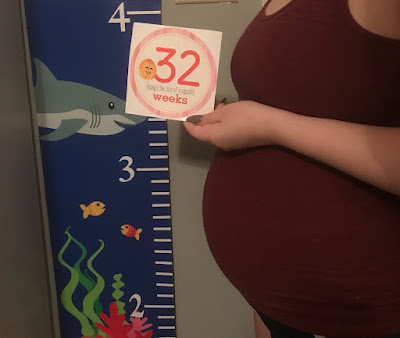 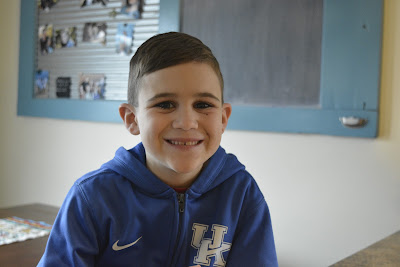 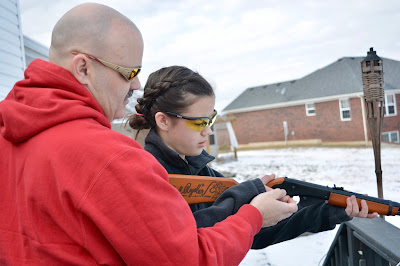 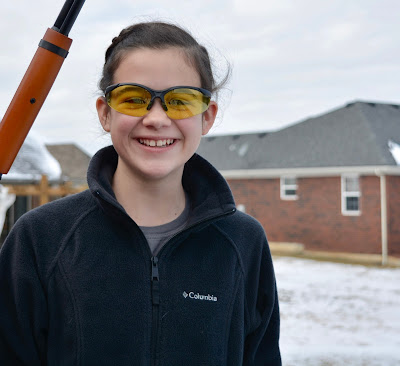 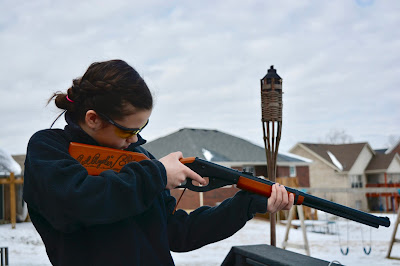 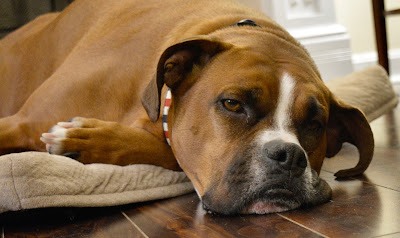 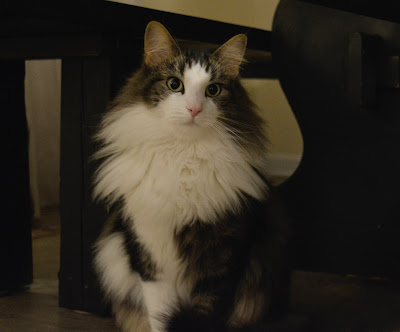 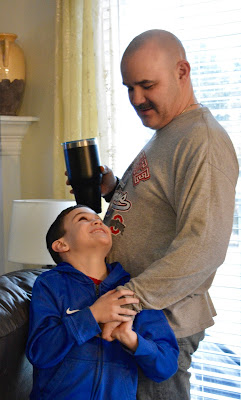 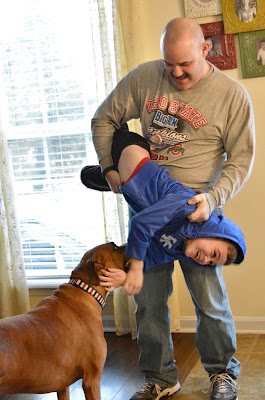 This was an unusual week with snow days, delayed starts and a weekend in the mid 50's to wrap it all up. Lauren spent a day in the hospital with contractions that fortunately didn't start labor. She then failed her three hour glucose test so she is navigating six finger pricks a day to monitor blood sugar. Pregnancy is so much fun, she has repeatedly asked me how she has so many siblings. I try to convince her this is the stuff you forget when that precious baby is laid in your arms but she does not believe me.

Ty packed to run away again this weekend because I continued to serve vegetables with dinner. Erin supported his reasoning and mentioned it is the key reason she moved out a few years ago. She then took leftover chili home with her saying it is so good, it could probably prevent war "as long as I don't also make vegetables".


Posted by Baughman Family at Sunday, January 21, 2018 No comments: 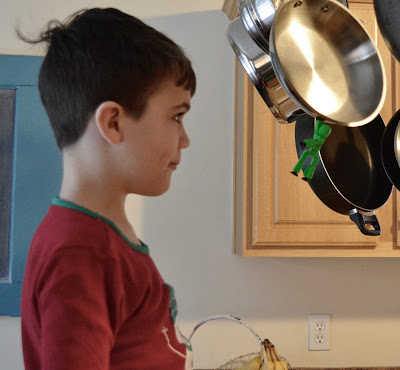 He woke this morning just after the sun (or what we can see of it anyway) full of ideas and endless chatter. Fortunately I had just completed my third cup of tea and in the quiet of the morning was able to keep up. Barely. He plans to be a super hero when he grows up, yielding a real light saber to protect the good guys of the world. I love his heart and creative brain. 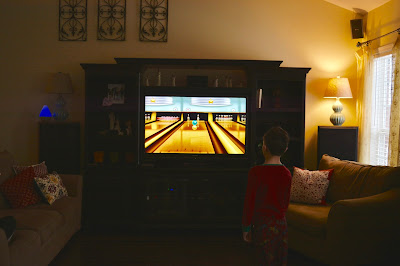 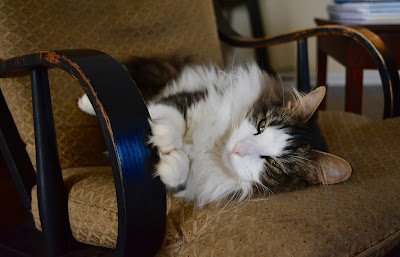 Family games with peanut M&M's occupied a fair amount of our time as the single digit temperatures prevented hours of snow play. But we tackled some sledding none the less. Breaks in the heated car were required at frequent intervals despite the kids' insistence they were fine to keep going. 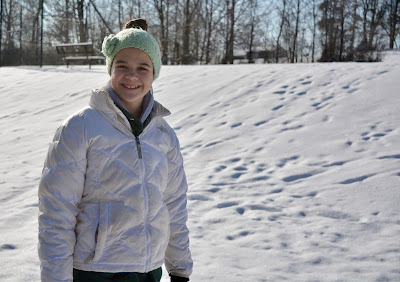 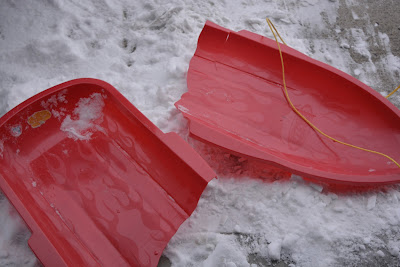 My dryer has been working overtime in recent days with endless loads of snow suits and gloves because they play outside for a little bit, come in to warm up and within an hour are suiting back up for the great outdoors again. But the slower pace of these days was exactly what we needed to reconnect, catch up on some reading and each other's thoughts. We played hard, relaxed well and enjoyed extended time together. It is only January and we are already borrowing makeup days from Spring Break so we need to make the most of snow days. 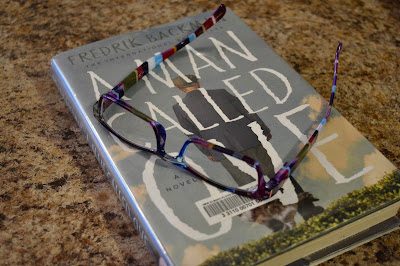 Posted by Baughman Family at Wednesday, January 17, 2018 No comments: 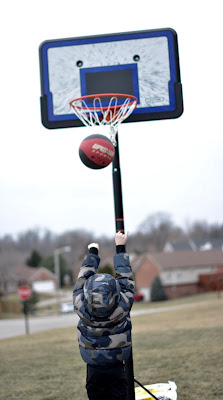 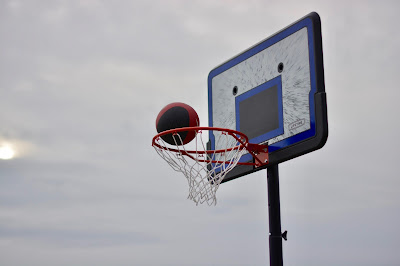 The long cold days of winter arrived with a vengeance and I am grateful most of the days have been deceptively sunny. We haven't seen temperatures near freezing until today so 38 degrees felt like Spring. Ty and I shot some hoops finally, putting a Christmas present to good use almost three weeks after the fact. He loves it and I love seeing his focus and determination on something other than video games. 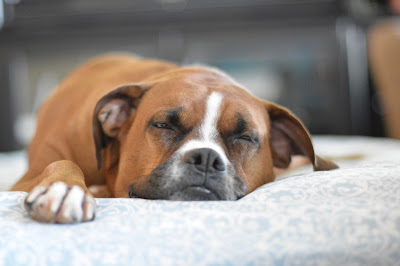 Layla has decided to hibernate for the winter. She sleeps all day, wakes as the kids return from school around 3pm and drives us crazy until about bedtime around 8pm. It's a "ruff" life. 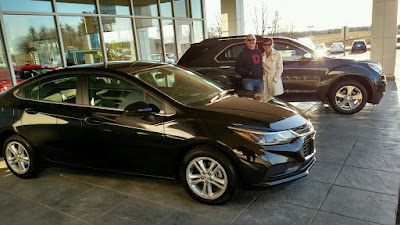 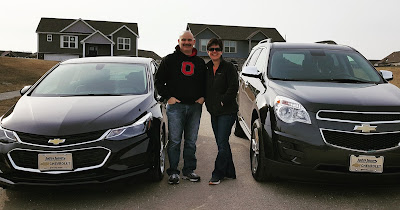 Greg and I experienced one of the longest and certainly most expensive dates together yesterday. I think our first mistake was informing the salesman he was our chaperone because we hardly know how to behave when we don't have the kids to tend to. Anyway, when you go car shopping in the dead of winter with an air temperature still in single digits, there is no doubt you aren't just kicking the tires so we dreaded the experience, knowing they had us immediately. But choosing to select two new-to-us vehicles at the same time gave us some negotiating power. Greg now has a slick black Cruze for his almost 900 miles per week commute and I have finally retired my mini van career for a shiny dark grey Equinox. It was a long 20 years as a mini van driver and I like the change!
Posted by Baughman Family at Sunday, January 07, 2018 No comments:

The first three major decisions made in January have me wondering if my husband may jump ship this year. First, I decided to stop buying snacks at the grocery beyond produce and yogurt. A few people in my house rely heavily on crackers, chips and cheap granola bars for their sustenance and their health is important to me. My cart on Sunday was overflowing with healthy produce and quality meats. Both men in my life mentioned having nothing to eat as result. But being without a vehicle all week left them no choice but to adapt. Interestingly enough, no one has starved despite claiming it as a very real possibility.

And then I had the nerve to suggest my husband clean out his closet and dresser. He got four new dress shirts for Christmas and didn't have enough hangers to put them away. He conceded and pulled four very used shirts out of his closet and declared it "good enough". I laughed and pointed out another half dozen shirts not worthy of donation as they were too far gone and apparently hurt his feelings. I pushed a little harder and requested we go through his dresser and he shut that down immediately. On Tuesday while he was at work I text asking if I could purge his wardrobe the way I felt it needed to be done and promised he would get final veto rights. He very reluctantly agreed. I left the man with twice the wardrobe I have in my closet but pulled almost half of what he owned. Bless his heart, he holds onto everything. I donated 20 year old sweatshirts with company logos on them, identical worn out tee shirts, a dozen old dingy under shirts, etc......four large trash bags full. It was all stacked on our bed when he got home and he stood over it with an expression of deep grief on his face as he clutched three out of four identical black pull over jackets in his hands. When he finally spoke, he looked me in the eye and quite seriously stated, "you are being mean." I tried not to laugh but failed miserably.

In the end, I pointed out he has a wife who does laundry multiple times each week and still contains a large enough wardrobe for four men. He was not going to be naked anytime soon. He allowed me to donate the clothes because I knew without question that if any of it went into the trash, he would have freaked out on me.

Interestingly enough, this entire experience shed some light on another situation we are coping with in our home. The school has requested some testing for Ty. He is either extremely gifted or has ADD with some sensory issues. We have been navigating doctor's appointments and conferences for him in hopes of some answers even though to say we are hesitant would be an understatement. Anyway, watching Greg part with old clothes looked very much like Ty holding onto an idea he values. The only acronym I suspect that will apply to Ty when this process is complete will be DNA. But as it turns out, the end result of that is pretty awesome.

For the perfect storm, this week both cars were finally finished. Makenna's $800 repair became a $2000 rebuilt transmission and Greg's $200 gasket became a $1000 brake line and gasket with multiple phone calls warning us the fuel line leaks, the entire bottom of his 15 year old truck is rusted and as the repair man said, "no longer worth the money needed to make it safe." This is not the news we needed this week but it is what it is.

It appears we are car shopping this weekend. I loathe car shopping. Greg wants a truck but the amount of miles he now puts on his truck for his work makes a truck an unreasonable investment at the moment. My proposition was to keep the truck for projects and hauling since we did just drop $1000 into it and won't use it often and get him a fuel efficient car to help cut costs. This man has never wanted to drive a car in his entire life but he is very reluctantly agreeing. It's a good thing we have an otherwise good marriage because I feel like he would pack up his old truck with mountains of old clothes and drive off into the sunset if we didn't after this week!
Posted by Baughman Family at Friday, January 05, 2018 No comments: